You may have overheard us saying we like to rub our meat, so you can probably guess that we get excited about what we do. 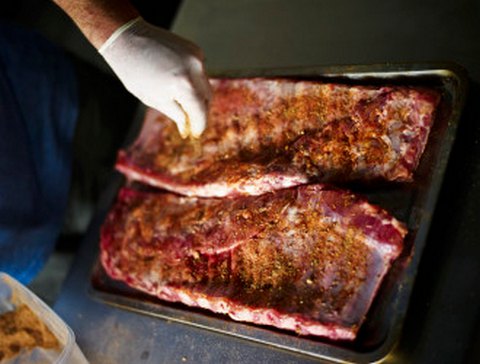 You may have overheard us saying we like to rub our meat, so you can probably guess that we get excited about what we do. But it’s not just an empty hand gesture. Rubbing meat is serious business.

If you ever hear a chef talking about ‘seasoning’, they are probably talking about salt and pepper. These are the two gods of flavour. They are to a chef like duct tape is to an electrician. Or a squeegee to a window cleaner. Or a bottle of baby oil and some tissues to a masseuse. Without them you are going to leave your customers pretty disappointed. Most savoury dishes will contain salt in some level, and probably pepper too. Salt is a flavour amplifier, suppresses bitterness, balances sourness and allows flavour molecules to release from foods. It is the balance of salt which more often than not separates the delicious from the bland.

Some dishes are absolutely delicious when seasoned perfectly simply. For me, the perfect steak is generously seasoned with salt and pepper, and nothing else. But there are other times when seasonings can take you to another level entirely. And this is the world of rubs.

A rub is a blend of herbs & spices used to jack up the flavour of a dish. Rubs come in two basic forms, the wet rub and the dry rub. And the difference is surprisingly not just the use of baby oil or moisturiser. A wet rub, like Pesto, is smothered in oil which lubricates and serves as a sauce, of sorts. A dry rub is a concoction of dry spices and herbs which are rubbed onto a cut of meat and help to create a crust of amazing complex flavours. Many chefs guard their rub ingredients as top secret, much like the recipe of Coca Cola or the Colonel’s blend of 11 herbs and spices. When you think about it, having a secret rub sounds like something a teenage boy does in his bedroom, but when you onto something that good, why (not) do it in public?

There are some common ideas of what needs to be in a rub. Everyone has their own style – so whatever works for you. Here are some things to consider before you attack your meat.

Sugar is a common additive in rubs. There are many kinds of sugar with different flavours and textures, but sugars in general help to caramelise and brown your food, as well as adding a hint of sweetness. Combined with the other ingredients, sugar will help form a crusty surface on the meat, adding another dimension of texture to a dish, a crisp surface to counter the soft tenderness inside. Spices & herbs are key producers of aroma and colour. Some spices, such as paprika and turmeric are used primarily to bring a nice red or golden hue to the finished food, but others such as garlic and onion powder bring wonderful sweet fragrances and flavours. Spicy elements like chili, chili powder or pepper bring kick and play with the spicy receptors on your tongue. They also contain molecules such as capsaicin which is known to bring euphoria and pleasurable experiences for some people. Finally, you have your salt.

Dry rubs are generally applied prior to cooking. A generous covering of the spice mixture is often massaged deep into the meat. This serves several purposes, the first being to penetrate the flavours deeply into the cut. It also helps to loosen the muscle fibres and ‘relax’ the meat. Just remember rubbing relaxes and leads to penetration and you’ll be fine.

At Quán Ụt Ụt we rub our meat for you with the tenderness and gentleness of an experienced woman known only by a number. Then we kiss our ribs gently and put them to rest in the smoker. Goodnight sweet ribs. We’ll see you when you wake up.