That was the first time I met Mark. As friends of friends we already had the briefing on each other. We both loved to cook and both loved music. 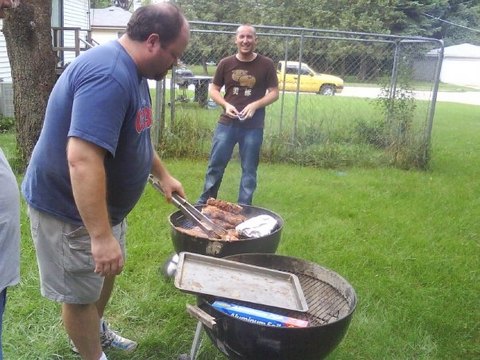 It started a few years ago. I was visiting Chicago to see Jane’s Addiction at Lollapalooza with a close friend who had grown up there. We went to stay at his friend’s house. It was summer. It was hot. It was damn near perfect.

That was the first time I met Mark. As friends of friends we already had the briefing on each other. We both loved to cook and both loved music. It was one of those moments when the stars align (the scientific term for this is syzygy – which also happens to be a fantastic Hangman word). Mark welcomed us into his home and without skipping a beat, jumped straight into it. “So,” he said, “I heard you want to know about barbecue.”

I am Australian and I have a confession to make. Australians pride themselves on their barbecue skills. Hell, there is not a single celebration in Australia that is not spent standing around a fire wearing board shorts and a wife-beater with a beer in hand watching someone tend to meat over a flame. But this is not barbecue. This is grilling, and it’s an entirely different game of cricket. To me then, the concept of American barbecue was the tip of a magnificent iceberg, and like a thirteen year old boy seeing down a schoolgirl’s blouse for the first time, I was desperate to find out what was beneath the surface.

“What style do you want to know about? Texas? Memphis? Kansas?” Mark continued.

“All. I want to know it all,” I replied in my funny accent.

Two trusty Weber BBQs and an old smoker were wheeled out into the backyard. Enough pork to feed a football team appeared and Mark set about preparing the meat, all the while explaining the nuances of the various regions, the different styles of rubs and techniques, and the secrets he’d learned over the many years of honing his craft. We made sauces, four in all, and picked fresh habaneros off his plants for salsa. Friends showed up and brought beers and a general buzz permeated the backyard, a combination of the aroma of smoking pork, the warm glow of beer on an empty stomach and a general positivity that everything was just right.

I would be lying if I didn’t say there was something magical about that night. Fireflies danced in the long grass and, like a kid again, I chased them and with greasy fingers I squished them and painted my arms with their glowing insides. With full bellies we sat and talked until the early hours, passing around home made beers and picking at the mountain of pork still piled high on the table. We didn’t know it then, but the wheels of fate had already been set in motion.

That night, Ụt Ụt was born like a phoenix from the ashes of the barbecue. That steamy summer night, barbecue would unite us. And with pork juice dripping down our chins, we would find our destiny.