On our first night we did twelve customers. When we packed down and cracked the tops off a couple of celebratory beers, we realised it was not the peak of Everest that we had conquered. 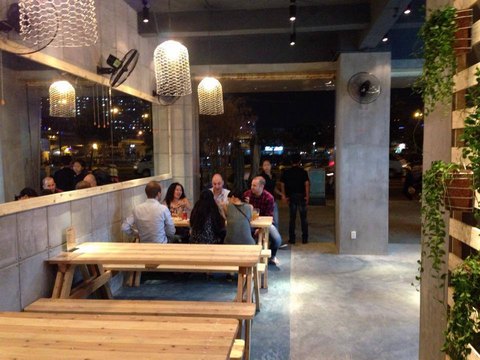 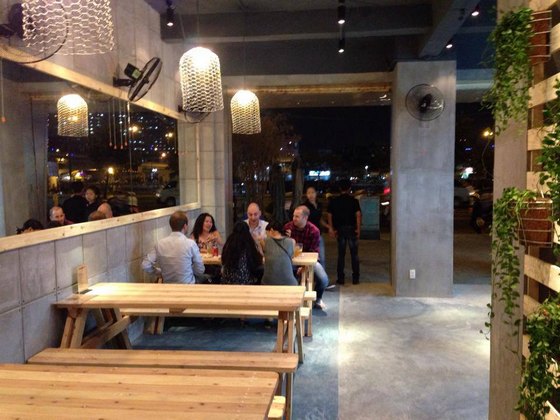 A layer of dust an inch thick covered almost everything. Every day it would be swept up and the next day it would appear again like fresh mountain snow, although without the majesty and excitement. Making dust angels just isn’t as fun, and you run the real risk of being punctured by a stray nail or piece of porcelain from the brand new sink one of the builders dropped carrying up the stairs. For some bewildering reason, things got erected and then only hours later torn down again and rebuilt, adding precious depth to the dust dunes. A camel wandered in and collapsed from thirst.

In a construction site, when your phone rings, first you have to find it. Everything is the same fuzzy colour, pale grey, and can only be identified by its three dimensional outline and, if on vibrate mode, the tiny movements still shaking when the jackhammering has momentarily ceased. I picked it up and listened to a friend’s voice,
“Damn, are you guys open yet? Can we come tonight?”

Distracted by someone delivering the wrong coloured straws, I accidentally said that we could indeed accommodate them, and looked forward to seeing them soon. I turned to the others at the table, trying to recognise them by their three dimensional outlines, and relayed the good news. “Shit,” I said. “Looks like we have guests tonight.”

The mad scramble to get the place clean was underway. Buckets of black water were ferried from the dining room to the drains and slowly the room began to resemble a place fit to eat. In The Wizard of Oz when the house comes crashing down in Munchkinland, there is a sudden shift from black & white to Technicolor. Looking around the restaurant we could finally see it in its full glorious spectrum. That was mostly grey though, as we had chosen an industrial concrete feel, but finally seeing the grey in all its splendour filled our hearts with the warmth of a thousand rainbows.

We ticked off our checklists. Food ready? Check. Uniforms on? Check. Place clean? Check. Dead camel removed? Whoops… on it. Bar ready? Bar? Oh crap. We didn’t have a bar yet. We would have to make do with no bar, as with many other missing components of the almost-ready-to-open restaurant. Besides, it was just a couple of friends coming down. It was as soft as a soft opening could be.

Our trusting and game-for-anything guinea pig friends arrived and were fixed up with everything we had to offer. They loved it. For us, it was the icing on the cake. The crackling on the pork belly. The happy bit of the massage. We had climbed our own personal Mt Everest and stuck our flag in the top. And we patted ourselves on the back and finally took in a deep breath. Unlike Edmund Hillary and Tenzing Norgay, we had not required oxygen tanks, so our sense of accomplishment was that much greater.

On our first night we did twelve customers. When we packed down and cracked the tops off a couple of celebratory beers, we realised it was not the peak of Everest that we had conquered. It was just base camp. This was the beginning of a long and steep climb. It would be one step at a time. At times we would fumble and narrowly avoid being eaten by rabid yetis, but squinting into the sun and with our eyes set firmly on the summit, we strapped on the oxygen, took a deep breath and marched forward.